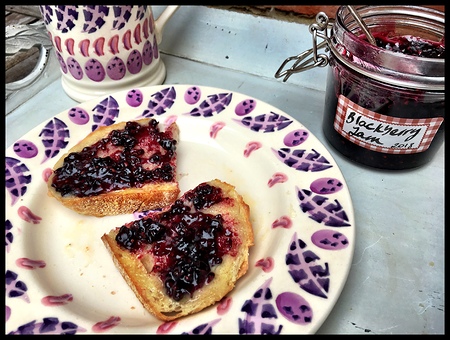 I'd always thought jam-making was the sole, ahem, preserve of bona fide WI members, or Essex-based factories. And when my most Domestic Goddess friend (knocks up a batch of tarts whilst juggling the kids' dinner, sews a new dress in a rainy afternoon, builds a house for something to do in the summer holidays, etc) complained that her freshly made jam refused to set, I swore never to even attempt this most mysterious of kitchen arts.

But then we went blackberrying. And came home with such a bounty of berries, that other than make endless blackberry crumbles and pies (delicious, admittedly, but not what my waistline needs), we had to do something with the fridgeful of fruit. A quick Google revealed I only needed two other ingredients – sugar and a lemon or lime – and I figured that, in the worst case scenario, I could probably still find an edible use for failed jam. Too runny = compote for Greek yoghurt, or filling for tartlets; too set = posh cheese accompaniment. By my reckoning, I didn't have much to lose either way.

Thus I found myself, a short while later, bubbling half a kilo (ish) of blackberries with the same amount of sugar, and the juice of one lemon (for the pectin, to help it set. Or just use Jam Sugar, but it's considerably more expensive than regular granulated). Once all the sugar had dissolved, the recipe requested I boil the mix furiously for 7 minutes, which I obediently did, whilst sticking some clean Kilner jars in a low oven (to sterilise).

At this point, if I was a true WI stalwart, I would whip out my handy sugar thermometer, check the jammy mixture was at 105C (the 'setting point'), and instantly decant it into my sterilised pots, cover with pretty floral circlets, and label up ready for the next village fete. As it was, I dripped a teaspoonful onto a cold saucer, pushed it to see if it wrinkled (tasty, but not tacky enough), and decided to keep bubbling for a few minutes longer. A second saucer test proved stickier, and we were in business.

Tiptree need not worry just yet. My jam's consistency would not have seen me pass even the primary auditions for The Great British Bake Off (I concede a sugar thermometer could be an advantage). But the joy of eating home-made jam on toast is unsurpassed. Especially if it's blackberry jam, easily the tastiest jam of all time, as I'm sure domestic doyen Mary Berry herself would concur.

Alice's White Queen may insist jam is only for tomorrow, but now that I've been initiated into this ancient culinary ritual (and discovered that, actually, it's ridiculously easy), there'll be no jam-free days in this house!